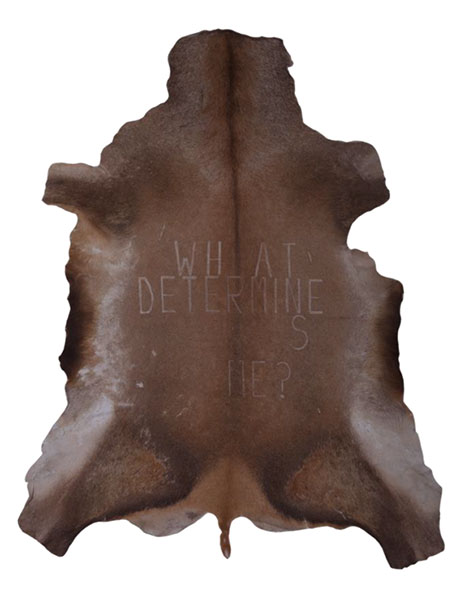 What determines Me? Shaving intervention on a deer hide, 190cm x 130cm, 2017, revives the raw emotion through the raised question: What determines me? Where am I? Who am I? Who are they? This question is raised as a trophy from a trip on the route Belgrade – Brussels – Belgrade, exit – entrance, from one country to another during the last year ‘s multiple travels and visits.

So far, my work has been characterized by the drawing practice, painting and drawing techniques on paper and a raw canvas of medium and larger dimensions. Later, other technical and conceptual aspirations based on different media (video, photography, installation in space, animal skin) as means of communication and interaction with the audience developed from the drawings. Photography as a medium took its place in relation with the presented drawings. Wall installations composed of drawings and accompanying photos made one spatial unit.

In the latter stage of my exhibiting practice, the exhibition space does not only dictate but it also becomes a part of the work itself, not just as its support in the perception of  the artistic expression, but it also determines the ways of presenting a certain idea and the media by geometry.
From this consideration, one drawing has the significance to be displayed in different ways in space and via various media. Shaving intervention on a deer hide in the work What Determines Me?, 190 cm x 130 cm is one of the forms of display, “drawing” on an animal skin, as an exhibit – an object on the wall.

This eclectic work always has a drawing as the basis of the research and contemplation, while presentations are closely related to space and other media in an unconventional setting, often spatial.