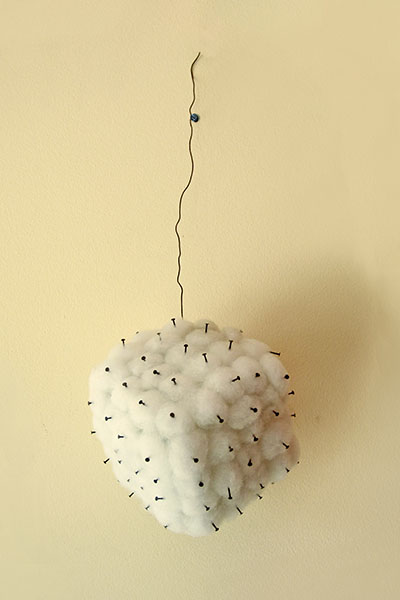 Technique: mixed (vatelin and metal, mounted on the nail which is part of the artwork)
Dimensions: 80 x 21 x 21 cm

After creating my oversized soft sculptures, I started working on the development of considerably smaller works made of vatelin in combination with other materials, such as the work with which I compete for your exhibition. The work is characterized by extremes based on: soft – hard as well as white – black, emphasizing the universal problems of human existence today. I am striving to reconcile reality and dreams, as well as the aspiration to establish the lost harmony between man and nature.
The work is a combination of incompatible materials – vatelin and metal. In search of a reduced and clear visual language I am trying to discover the material’s layered meanings. Vatelin is a soft, airy form in which nails are pinned, like arrows that fix it in the given shape of a cube. The shape of the cube further limits the space, creates self-control which suggests a feeling of restraint and re-examination.

Ivanka – Vana Prelevic was born in Podgorica in 1965.
Graduated in 1990 and obtained her M.A. in sculpture in 1995 at the Faculty of Applied Arts and Design in Belgrade, in the class of Professor Miodrag Zivkovic. Obtained her M.A. at the Department of Scene Design in 2006 at the same Faculty, in the class of Professor Geroslav Zaric.
Member of the Association of Fine Artists of Montenegro since 1992. Since 1995, permanently employed at the Montenegrin National Theatre as sculptor. Engaged as set designer at Atlas TV from 2006 to 2007. Worked as set designer, costume and puppets designer for some twenty plays. She was set designer for the animated film “Nastup” (author: Ktarina O Hern, Centar film Beograd, 2007), and the film “Watch Me” (scriptwriter and director: Marija Perovic, Katun Movies Podgorica, 2008).
Granted the “Velibor–Bucko Radonjic“scholarship for scenography by the Montenegrin National Theatre.

…”The counterpoint of the soft, gentle, natural and, on the other side, the artificial, sumbolizing the urbanely and non-naturally, forcibly inserted into the natural envirorment, aims, to rebel and revolt against any soiling of nature, the envirorment, and as a last resort-to provoke a reaction against the visual and mental pollution..

The heads of the nails in the white surounding act as the puncturing of the route of movement, while at the same time, they are whate is recognized in the iconography of religious painting as instrumenti di martirio.The wires that appear  in the landscapes have the same function – as jount lines of the natural and simulated, and,  also, as a warining scar or seam in the  fabric of the scene”…